The construction of the Indigenous Science Research Institute is the vehicle to bring together Western and Indigenous sciences and to ground this third way of knowing and being at a site that has the necessary catalytic power to seed changes of destructive paradigms. The finished building of the Institute will serve a dual purpose as home for research as well as teaching and learning (the academic program at the University for Peace).  The site is designed to host a global forum of Indigenous cultural practitioners, Indigenous master scientists and Western scientists Its architecture fosters the development of earth-based knowledge and policy to address our current crises. 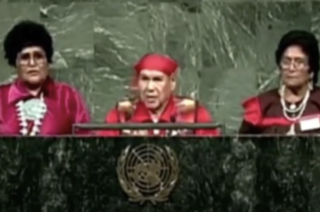 Hopi Elder, Thomas Banyacya addresses the United Nations General Assembly (March, 1992), his mission as the appointed interpreter of the (Hopi) prophecies was to take the Hopi message of peace, as he said:

“…to the Great House of Mica on the Eastern shore…where the nations come together…to solve world problems, without war.”

Elder Banyacya was warmly received by United Nations officials but his efforts were repeatedly rebuffed. On his fourth attempt he was allowed to make a brief speech but only when the General Assemble was in recess.

“It should be the mission of your nations and this assembly to use your power and rules to examine and work to cure the damage people have done to this Earth and to each other.”

There are two paths. The first with technology but separate from natural and spiritual law leads to…. chaos. The lower path is one that remains in harmony with natural law… If we return to spiritual harmony and live from our hearts, we can experience a paradise in this world. If we continue only on this upper path, we will come to destruction. It’s up to all of us, as children of Mother Earth, to clean up this mess before it’s too late.”

Indigenous peoples established places in historic sacred sites used for ceremony, learning and gatherings (including assembly to negotiate tribal and inter-tribal governance and policies). The systematic abrogation of Indigenous traditional knowledge and their human rights through the continuing history of colonialism is unrelenting in its mission to disconnect Indigenous people from these sites. The colonial rationale justifies the destruction and control of sacred sites by commercial, private and governmental interests while epistemic violence dismisses the needs of Indigenous peoples to have access to and holding ceremony at remaining sites. This injustice is amplified by the exclusion of Indigenous leaders at places (considered significant to colonial powers) where policy is shaped that directly impacts indigenous communities.

Indigenous leaders continue to call on governing colonial powers to allow Indigenous participation in policy making decisions including at international forums. Although international forums, including the UN and UNESCO, may on occasion invite Indigenous speakers to share their reproach and direction. Yet, these insights are treated as symbolic moments fulfilling requirements of diverse representation, but they are parried with verbiage that prevents meaningful action. This type of social injustice is not isolated to political platforms, it reaches far into socio-cultural structures. Universities are historically colonial structures that have failed to acknowledge the validity of Indigenous knowledge systems.

Where then, can Indigenous and Western scientist and cultural practitioners come together on equitable terms to address our global emergency? Where can Indigenous leaders collaborate with Westerners to catalyze real change that goes to the roots of the crisis?

Building the Institute as forum for research, knowledge exchange, and learning an answer to this question. It will give birth to a third view, embodied by people radically connected with nature who honor and comprehend the interconnectivity of our being.  This vision of Indigenous science and peace emerging from the meeting of eagle and condor can carry us into the future.